Fretting is a type of metal fatigue that occurs when two metallic surfaces are in contact with each other and is subject to rubbing. This can occur from normal movement during use. Examples are with modular hip prostheses or it can stem from vibration commonly experienced by turbine blade dovetails. It’s referred to as fretting corrosion because the friction of the two surfaces rubbing against one another causes the formation of oxide debris.

Why does this fatigue cause failure in critical components?

Fretting can reduce the fatigue strength of the material from one-half to one-third of its normal endurance limit, causing fatigue failure. The visible corrosion is not the cause of the fatigue. It comes from small shear induced micro-cracks at the edges of the contact zones. These cracks are usually quite shallow, extending less than .005 inches into the surface. However, they propagate quickly under the normal stresses.

How can you mitigate the fatigue?

The introduction of a deep, stable layer of compression with a surface treatment method like Low Plasticity Burnishing (LPB®) in the affected area prevents the micro-cracks from developing into a fatigue crack. When the edge of the contact region gets a compression that’s much deeper than the shallow fretted formed cracks, the cracks cannot propagate through the compression, which eliminates the chance of fractures.

With LPB applied before fretting, or even for maintenance and repair after initial fretting, fatigue failures cannot occur from the surface or the fretting induced micro-cracks.

LPB has successfully mitigated this type of fatigue in many applications. Learn more about Low Plasticity Burnishing from Lambda Technologies Group and how it can prevent fretting fatigue in your critical metal components. 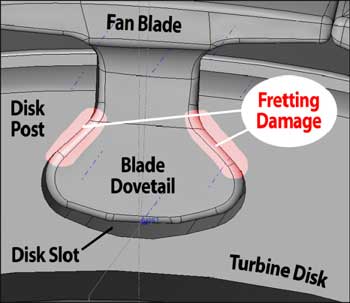 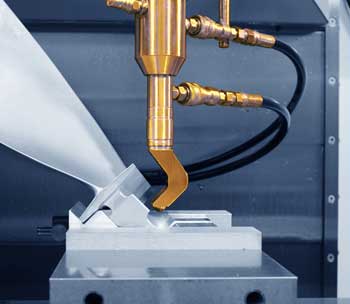 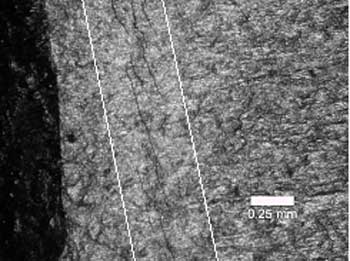 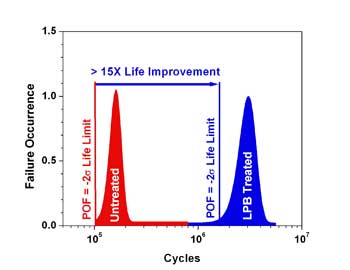